The question of “What is Energy?” has been studied by man from the beginning of time on this planet.  Indeed, the word energy takes on an array of meanings in our world today.

But how did it begin? Where is its origin?

The search for the first divine spark of energy and how to best utilize it has inspired us humans to make amazing discoveries. Our beliefs, convictions, and search towards understanding energy along with the structure and the form of the world not only lead to scientific advances, but they can also lead us on our own personal discoveries. This exploration of energy has the potential to bring meaning and a sense of real joy to our lives.

I now take a very big, scary, and daring step to talk about this structure and form along with the meaning of energy. I don’t claim to have a degree in Quantum Physics, and I can only speak from my experience. Still, I am learning and hope that you are willing to learn and explore with me, about the existence of energy. It might be helpful to understand the intention behind my choice to talk about something that is so vast, so immense, and with so many different meanings in the context of life and the human body. I have been blessed with an abundance of energy that allows me to move each day from one activity to another, pursuing many passions and requiring very little sleep–an average of 5 to 6 hours. I have learned that when I am in pursuit of a meaningful goal, my attention is directed and focused. The quality of my energy and attention has the power to transform me into a scientist, an explorer, a pioneer, an originator, an inventor or a healer. It drives me closer to my true desires and wishes, and puts me on a path of greater meaning.

Join me on this energy science trip, similar to the science experiments you may have done in elementary or middle school, to fully dissect and investigate what energy is. We will look at its meaning, how it is propagated to give form and structure to our world, and how it can travel and be transformed in a way that could bring about the hope that life has an order.  By growing our understanding of the structure and form in the world, we can unlock many mysteries. In particular, and of most interest to me, is the mystery of how best to bring health and healing to the human body through our understanding and harnessing of energy.

In my last post, we specifically focused on energy through the lens of gravity. Gravitational potential energy is the energy held by an object in regard to its position and height. This understanding of gravitational potential energy helps us to explore weight and mass and observe their effects on objects under gravity. Let’s review what Sir Isaac Newton, “Father of Mechanics” and leading scientist of the 17th century discovered in his 3 Laws of Motion:

For the purposes of our investigation here, let’s replace the word force for energy.  Newton studied the motion of bodies under the action of energy, and he worked to describe these energies that occurred between bodies of mass. One of the energies, he observed, and presented in his laws, was the relationship between the human body and the Earth. This led to the development of Newton’s Law of Universal Gravitation. In the diagram below, we can also exchange force (Fg ) for energy. Note that every line with an arrow is a vector force, or for our purposes, vector energy.  Every directional arrow is energy that is passing through every human being every second of every day. That is a lot of energy! 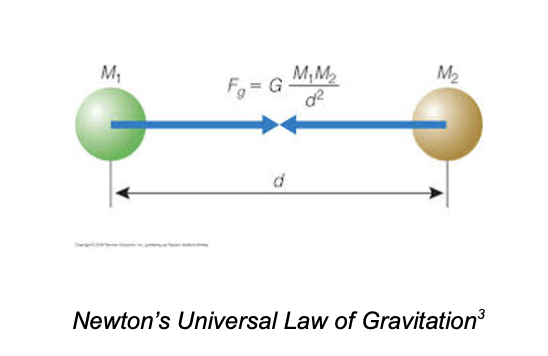 Furthermore, the gravitational constant (G) is gravity or gravitational potential energy. Newton observed that it is ever-present, ever constant. There is no escaping that all bodies on Earth have a weight, or downward energy of gravity, proportional to their mass, which Earth’s mass exerts on them. 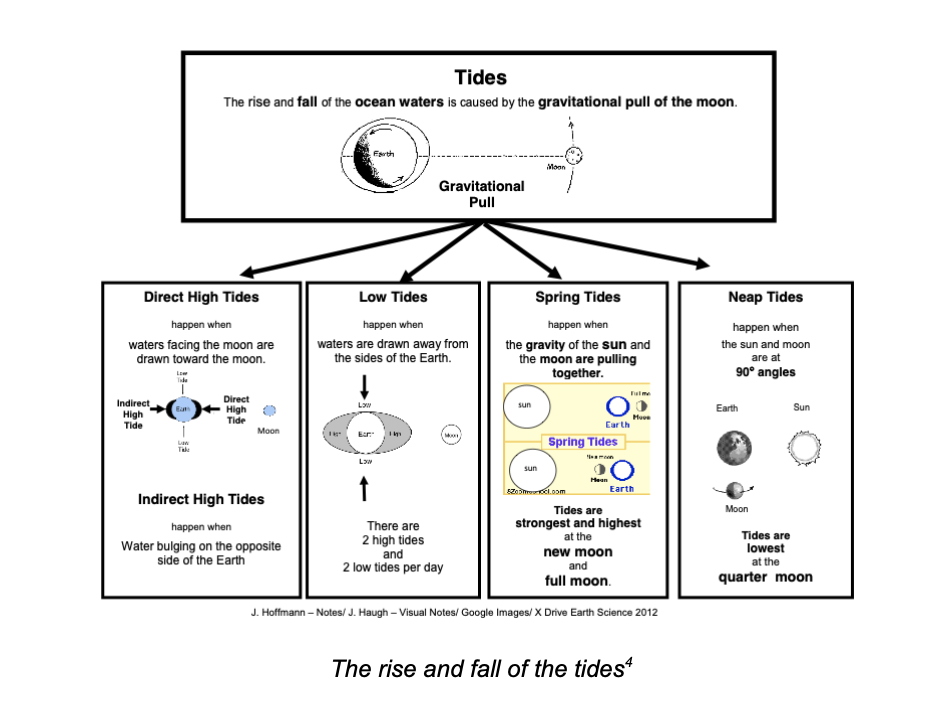 There are always two gravitational forces or energies acting through the human body in the action of standing on the earth.  The first force is gravity from the earth, measured at 9.8 m/sec sec acting through the crown of the head, down throught the skeletal system and into both legs. The second force is the gravitational force of the moon, which measures significantly less at 1.62fm/sec sec but is still incredibly powerful. The gravitational force of the moon has enough power to raise and lower the oceans all over the world.  I believe that there is enough force to encourage the human body to stand erect, by being gently pulled through the crown of the head towards the moon itself.

Along with the laws and forces of gravity, there are other laws that our bodies interact with everyday.  The principles of thermodynamics were originally expressed in three laws and an additional law. Today, we will focus on the First and Second Laws.

Let’s break these laws down a bit more. The first law of thermodynamics, also known as the Law of Conservation of Energy, states that energy can neither be created nor destroyed and yet no system is 100% efficient. Some energy gets lost into the universe, never to be returned. The second law of thermodynamics states that an action must happen in order to raise a lower temperature to a higher temperature. For instance, looking at the mechanism of a boiler to receive heat–we have to send electricity to a boiler that raises the temperature of coils,which then heats the water. This machinery shows that energy has to be put into a system or object in order for energy to be produced out of a system or object.

Given this information, the question we are left with is: how can we be more efficient with the energy we’ve been given and is it possible to reuse it over and over again?

Looking into this question more, the Second Law of Thermodynamics states that while energy is never gained or lost, its availability for work decreases each time a transformation occurs. The percentage of mechanical energy that becomes unusable kinetic energy (heat) due to friction or useless chemical reactions determines the system’s inefficiency, and no system is 100% efficient.  Energy will always be lost to the universe, never to be recaptured.

And yet, the body can recapture some of this used energy from muscle activity through the process of Cellular respiration.  It is the process of returning rapid muscle contraction to normal after exercise through the conversion of excess pyruvate into ATP and regenerating the stores of ATP or energy. Cellular respiration exemplifies how the human body tries to reuse energy to make more energy and how muscle efficiency is directly related to the degrees of muscle tension and level of relaxation in the body.  Furthermore, this quality of relaxation of movement is directly related to our quality of breathing as well. 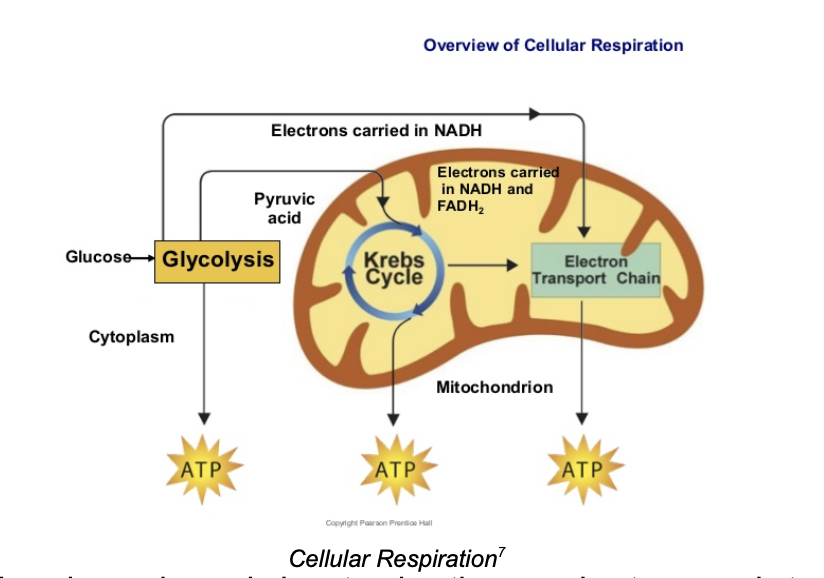 Cellular respiration plays a key role in returning the muscles to normal stasis after exercise. It has the important responsibility of converting the excess pyruvate into ATP and regenerating the stores of ATP, phosphocreatine, and glycogen in the muscle that are required for more rapid contractions.  The process is a powerful example of how when the body works efficiently, it is able to reuse energy to create more energy. On the contrary,  when the body works inefficiently by using excess muscular tension during exercise it overloads the muscle with lactic acid causing early onset muscle fatigue.  Efficient movement is related to the proper level of muscle activation to a given activity, no more and no less, so that energy used and movement activity can work harmoniously.   If you are uncertain about how you can be more efficient in your body, you can look no further than your breath and the quality of your relaxation. I hope you remain with me on this exploration to learn more on breath and its power.

Energy is always present whether in the human body or a machine. Albert Einstein reduced its presence and existence to the equation, E = MC2. This well-known equation states that energy and matter are two sides of the same coin.  His equation presented the new observation that light and matter are just aspects of the same thing. Einstein presented that matter is just frozen light, and light is matter on the move.

How does one become the other though? That answer will require more experiments and further investigations on our journey.

Taking what investigations we have done thus far in our science class though, how do Einstein’s equation, Newton Laws, Thermodynamics, and the question of what energy is relate to me and you personally on an everyday basis? There are activities and experiences that we move through everyday, although we may have taken them for granted, that show us these ideas firsthand. Thus, it should not be hard to understand that in the human body, these same principles have to apply.  The laws of energy allow us to move, think, feel and experience the force and power that courses through our bodies via arteries, veins, nerves, synaptic impulses and organs every nanosecond of our life.

Is it not true that the human experience–or maybe better yet, the human experiment–is to understand, feel and sense energy that courses through us?  Does this question remain as simply a science question, or can it be a source of discovery?

Do I have enough energy to pursue the important quest of my life?

The answer is yes, me and you as human beings have all the energy that is needed to thrive. Yes, if disease or injury should occur then that energy goes to preserving the survival of the body. Nevertheless, the energy is there. It doesn’t matter if we can’t see it; it’s just a matter of how it is being used.