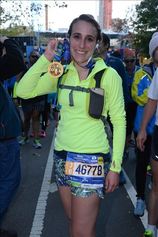 We did it fellow marathoners! Whether you were a first timer like me, or experienced, we passed that finish line during Sunday’s New York City Marathon and completed a momentous goal! Of course, after that much physical activity, the muscle soreness is inevitable. I am personally in the midst of delayed onset muscle soreness (DOMS) today and hating every time I must sit down, stand up, or go up or down stairs. My plans to help assist this pain are pretty similar to most of yours, including stretching and foam rolling; but have you thought about going for another run? I know this sounds like the absolute last thing you would like to do right now, but if personal experience has taught me anything, it is exactly what I need right now!

The authors put forth other theories of what causes DOMS including connective tissue damage, muscle damage, and inflammation. All of these theories were contradicted by the findings of other researchers including inability to recreate past experiments, lack of significance of experimental results, muscle damage was present before soreness was reported, myopathic diseases that involve muscle damage do not present with the same muscle soreness, and the inflammatory process was most prevalent when soreness was decreasing or absent. The cause of DOMS may not be agreed upon, but treatments for it have been proven through research and clinical experience. As stated in a previous blog by myself, about the benefits of foam rolling, self-massage/foam rolling is proven to be beneficial in decreasing DOMS. Cleak and Eston also found in their research that exercise is helpful in decreasing DOMS. Experimental groups were found to have significantly less creatine kinase (broken down muscle protein) levels and complaints of soreness after heavy eccentric exercise when they exercised at a submaximal level 1-2 days after heavy physical activity.

In my personal experience, run/walking 3 miles a day or two after a half marathon has been significantly helpful in reducing any DOMS I may have suffered from, so I am confident that a short run after a marathon will make a world of difference in my pain level. If you are suffering from DOMS after a big race, consider exercising at a submaximal level to decrease your pain. If you are unable to alleviate or reduce your pain through exercise and foam rolling, remember to see a physical therapist and always exercise in safe and healthy ways.